This is a great new six day Tour which combines a bit of military history (Siobhan's speciality) and a lot of Belgian Beer (also Siobhan's speciality). We will be exploring Brabant, its breweries and battlefields, the biggest being the field of the Battle of Waterloo fought on 18 June 1815. As this is August we have picked lots of cafes and restaurants with nice outdoor terraces so we can take full advantage of enjoying sipping a nice cool Belgian beer in the height of summertime in Brabant.

11.00hr Arrive Calais. We make our way across northern France into Flanders.

12.00hr Our first stop is at the lovely farmhouse cafe restaurant ‘t Boeregat in Houtem. We’ll have a meal here and slake our thirst with our first, fresh Belgian beer. Found down a short track off the road, this is a rural Flemish gem and has small rooms filled with ye olde Flemish memorabilia, farming implements etc and has animals inside and out. The beer card has 40 choices from the cream of West Flanders breweries.

15.15hr On our way to our base in Leuven we will pop in for a visit to the Oud Sashuis in Astene, a brilliant lock keepers café, complete with plenty of beers and Wim the lock keeper who still hand-winds the locks for passing boats and has a badly behaved green parrot, which I am assured is in residence and loose.

18.00hr Arrive at Pentahotel in Leuven, our base for the next five nights. It is in the centre of this great University city and has fitness rooms, a full buffet breakfast and a 24hour bar - not that you'll need it in this student city! Travellers are free to explore down town Leuven armed with Podge's Leuven Bar Guide* and Map*

10.00hr After a leisurely buffet breakfast* we leave the hotel by coach for a day exploring the Waterloo battlefield, just south of Brussels.

10.45hr Arrive at the main visitors centre and Lion Mound and park the coach where it will remain until 13.00hrs. Everyone will be given a Pass 1815 ticket* which gives entrance into 7 attractions and museums which we will split over the duration of the Tour so hang on to your pass! This morning we can explore • The New Underground Visitors Centre* Built in 2015 this is adjacent to the circular building housing the Panorama. This new visitors centre is said to be very good, especially the 3D film. You can view the only complete skeleton uncovered at Waterloo, Private Friedrich Brandt 2nd Line Battalion King’s German Legion. • The Lion Mound* You need to go through the visitors centre now to get to this. Constructed in the 1820s it has always been controversial as it significantly altered the battlefield. It does however, offer excellent views over the battlefield on a good day, but does tend to make the battlefield appear flat, which is far from true. The climb should only be attempted by the relatively fit, as it has 226 steep steps up to the viewing platform and there is no lift. • The Panorama* Also accessed through the visitors centre. This was painted in 1912 by Louis Dumoulin, it attempts to portray a 360 degree view of the great cavalry charges during the middle of the battle. Although it has seen some renovation, with sounds and smells, it is of minor interest, being of its time. • Hougoumont Farm* A shuttle bus runs from the panorama building the short distance to the farm every half hour (and returns same times). I suggest perhaps we all do this first together, then do the other sights.

13.00hr Leave Waterloo Battlefield from the coach park where we dropped off.

13.05hr Arrive at Waterloo Brewery housed inside the Mont-Saint-Jean-Farm used as a hospital during the battle. This is owned by Timmerman's Brewery and we’ll have a brewery tour* and beer tasting* perhaps out of the ceramic chalices made on site especially for this beer. They also have a shop with foody, beery and local gifts.

14.15hr Leave Waterloo Brewery at Mont-Saint-Jean-Farm and make our way south to Genappe and to a group meal at the Cafe de la Lanterne bistro in the centre of the village. This is an old tavern with 70 beers on offer including beers from La Rulles, De La Senne and Lupulus. They have a great food menu and we'll have a rest and some refreshment here.

16.45hr We call in for a visit to De Kroon Brewery and Tap in Neerijse. This brewery was disused until well-respected Professor Delvaux and his sons reopened it in the old village brewery in recent times. We can try their expertly crafted beer* here fresh at the brewery tap, for Professor Delvaux is the brewing expert which brewers approach when something goes wrong. These beers are rarely found out of this area.

19.00hr Arrive back at Pentahotel in Leuven for an evening exploring the city.

10.00hr After a leisurely buffet breakfast* we leave the hotel by coach for a day's jaunt around the other Waterloo battlefield sites of June 1815 and explore some of the action and memorials at Ligny (The Battle of Ligny, 16 June 1815) and Wavre (The Battle of Wavre 18-19 June 1815).

11.00hr Arrive at Ligny battlefield sites starting with the Naveau Windmill at Fleurus.

12.30hr Arrive for a break at a great beer bar in this area of Wallonian Brabant at the Beer Bar in Louvain-la-Neuve with 150 beers and a dozen draughts. We’ll need to park up outside the main town and walk in as this is a modern pedestrian city!

14.30hr Stop off at Wavre to see a memorial to three brothers in the French Grande Armée and to hear from Siobhan what went on here, prior to the main event on 18 June 1815.

15.30hr Arrive at the In de Molen in Bierbeek. This is a pretty place built into an old windmill and happens to have 150 beers on their card. Time for a little rest and refreshment here too. They have said we can order food off the menu on the day!

17.15hr We finish up the Saturday of the Tour with a visit to the Nieuwhuys Brewery Tap in Hoegaarden in the late afternoon and if you’ve never tried their dark Alpaide (10%abv) with its pruney/liquoirice lusciousness, you are in for a treat. Siobhan will get everyone a beer here*.

19.30hr Arrive back at Pentahotel in Leuven.

10.00hr After a leisurely buffet breakfast* we leave the hotel by coach for a day exploring some of the pearls of Flemish Brabant beer culture.

10.30hrs Arrive at the lovely traditional Flemish bar Boeres in Wezemaal, next to the church (optional – it is Sunday, after all). Sixty beers on the card of this little ‘brown’ beauty . Try the pale ale Jack-Op, an old beer which the owner revived and bought back from big narsties ABInBev.

12.15hr Arrive in the lovely town of Diest, the home to the Duysters Brewery and their Loterbol beers which are rarely found outside this region. We'll have time free here to have a look round the town, including the Taverne de Biertempel which is a typical brown bar, with 180 beers including Loterbol and some lambic beers which are very far from home here! We'll have time to find a snack or meal here, so foraging is the order of the day.

16.30hr Make our way back to Leuven via Moedermeule in Gelrode which is a brasserie attached a huge windmill built in 1667 and should stock local Hageland speciality beers.

18.00hr Our last stop of the day is to join the locals at a favourite location on a Sunday, the Benedictine Abbey of Vlierbeek on the outskirts of Leuven in Kessel-Lo. In the extensive Abbey grounds is a pretty old tavern called In Den Rozenkrans (The Rosary). This café is within the walls of the Abbey inside the Westgate. They sport a menu of 90 beers and have a very pretty outdoor terrace for evening vespers or a beer. As you choose!

19.30hr Arrive back at Pentahotel in Leuven.

10.00hr After a leisurely buffet breakfast* we leave the hotel by coach for a visit to both headquarters (now museums) to the two great men at Waterloo Napoleon and Wellington. We will try to find out a) why Napoleon is so bloody popular here and b) why poor old Blücher is all but forgotten.

11.00hr Arrive at the Quatre Bras battlefield for a look at the cluster of memorials round this famous crossroads.

14.30hr Arrive for a meal, if desired at De Met in Overijse, the centre of the Belgian wine industry. Yes, who knew. De Met is on the main square near the St Martinus Church and next to the grapes museum. Mmmm. They offer a beer card of 100 choices and serve rabbit in a grape sauce. We will be eating here, but eating rabbit is not compulsory!

16.45hr Leave De Met in Overijse for a drive back to Leuven.

17.305hr Arrive back in Leuven for an evening free exploring the City.

10.00hr After breakfast* check out of hotel. Coach leaves for our last day.

11.30hr We will pay a visit to Drankcenter Schotte in Waregem a beer warehouse with plenty of choice of beers so you can stock up on your favourite beers to take home.

13.00hr Call in at the excellent Feniks Brewery in Heule, West Flanders. This brewery is housed in the building previously home to Alvinne and Eutropius breweries. Siobhan is delighted to be taking people here, and it is a new brewery visit for Podge Tours (and we have done hundreds!). The brew-master is Gino Vantieghem who in the 1990s brewed at Quebec's Unibroue and made a big impact in the USA in the modern explosion of craft beers. Expect quality and quirkiness. Their Selfish Saison 6.7%abv is one for us blonde beer lovers and for you dark beer folk go for the 9.6%abv Heretique or the Jazz Black Oatmeal Delight at 10%abv. Here we will have a brewery tour* and a taste of their beer*.

15.00hr Our last stop will be a leisurely visit to the beautiful In den Grooten Moriaen in Wervik, West Flanders. This is a bar in a courtyard of a mill which is the headquarters of the National Tobacco Museum. We'll be having a go at their 70+ beer card and a little meal here to last us until Blighty.

We regret that we need to charge a single supplement for travellers who would like their own room. This is because increasingly there is no such thing as a single room price in hotels and room prices for a single person or two person occupancy are either the same or with very little difference. If you are travelling alone and want to share a room with another traveller please contact Siobhan as we are regularly able to pair up travellers in twin rooms to avoid the need for payment of the Single Supplement.

Included in the cost of this Tour are:

Luxury coach travel on a 49 seater coach with toilet;

All items marked with an asterisk above and on the individual detailed tour itinerary when issued;

Copies of Podge’s City Bar Guides and Maps for the town where we stay or spend some time;

Still and sparkling water on the coach;

Pick up from Ipswich (at bus shelter outside Crown House, Crown Street, Ipswich, Suffolk, IP1 3HS (opposite NCP Car Park), Colchester (Southway Chapel St South Layby) or Chelmsford (The Woolpack, Mildmay Road). Arrangements can be made for different joining points on the way to Folkestone or even on the other side of the channel.

Travellers are responsible for the costs of all food and drink apart from items marked with an asterisk on the detailed itinerary plus all passport and insurance costs.

All itinerary times are local and approximate.

Personal insurance is not included in the Tour price but is strongly advised, as is carrying the European Health Insurance Card available online, by phone or via the Post Ofﬁce.

All Tours are subject to our Terms and Conditions. 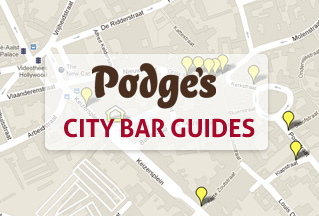 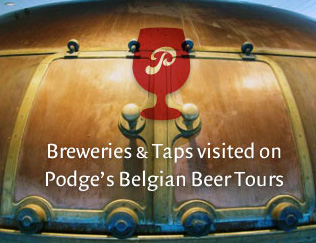